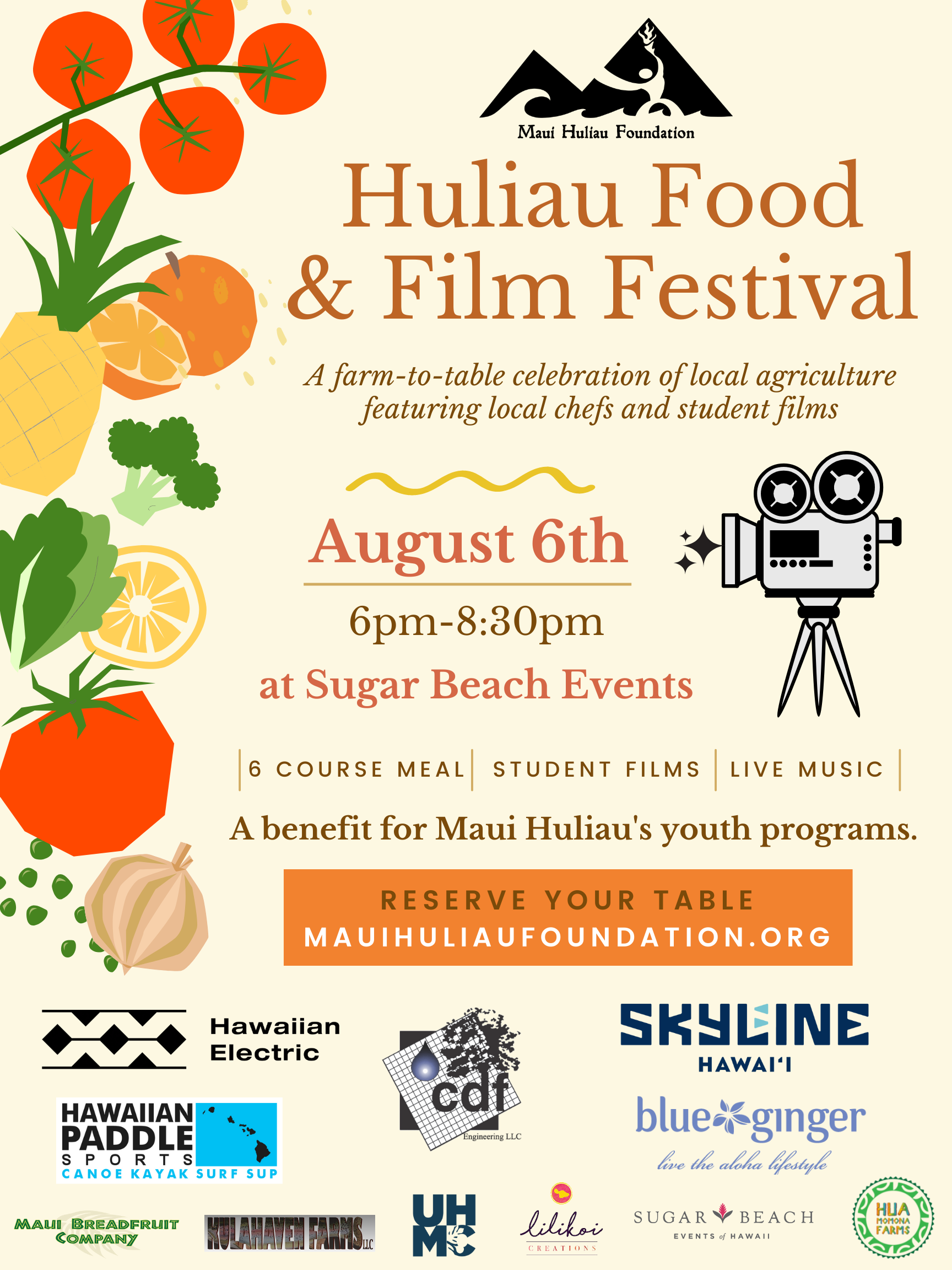 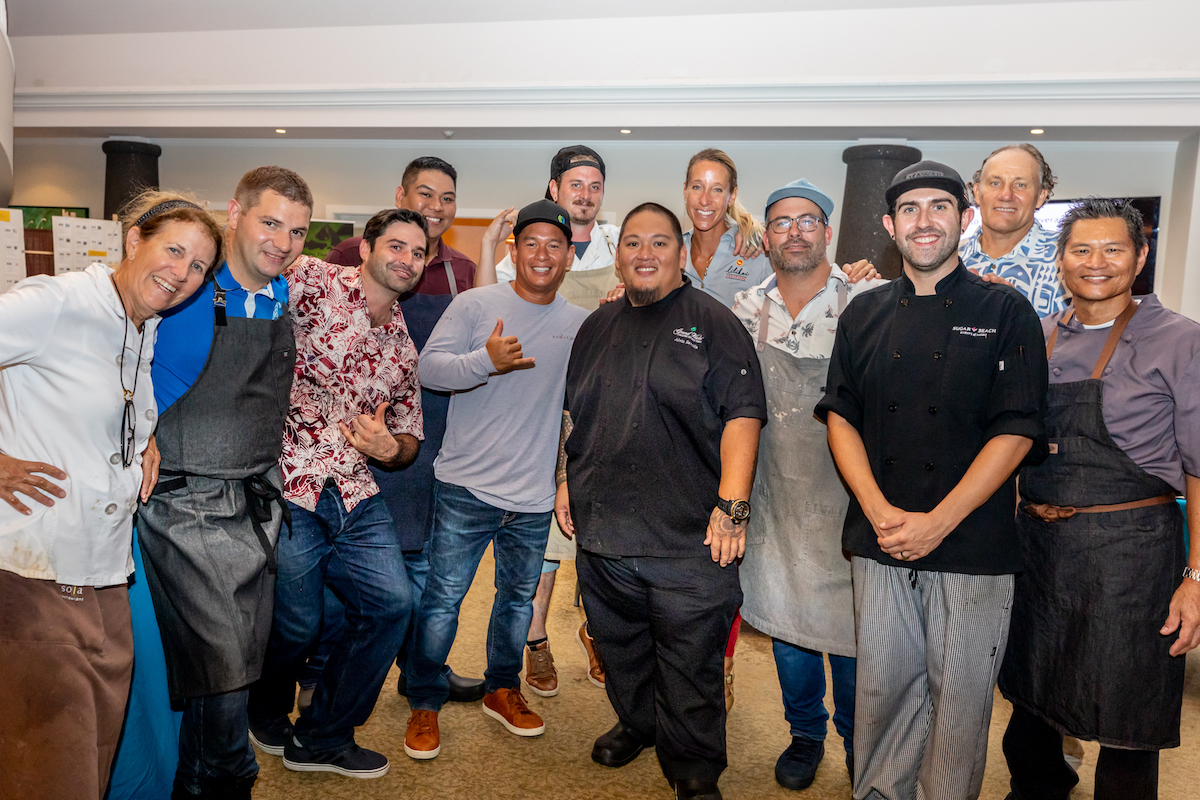 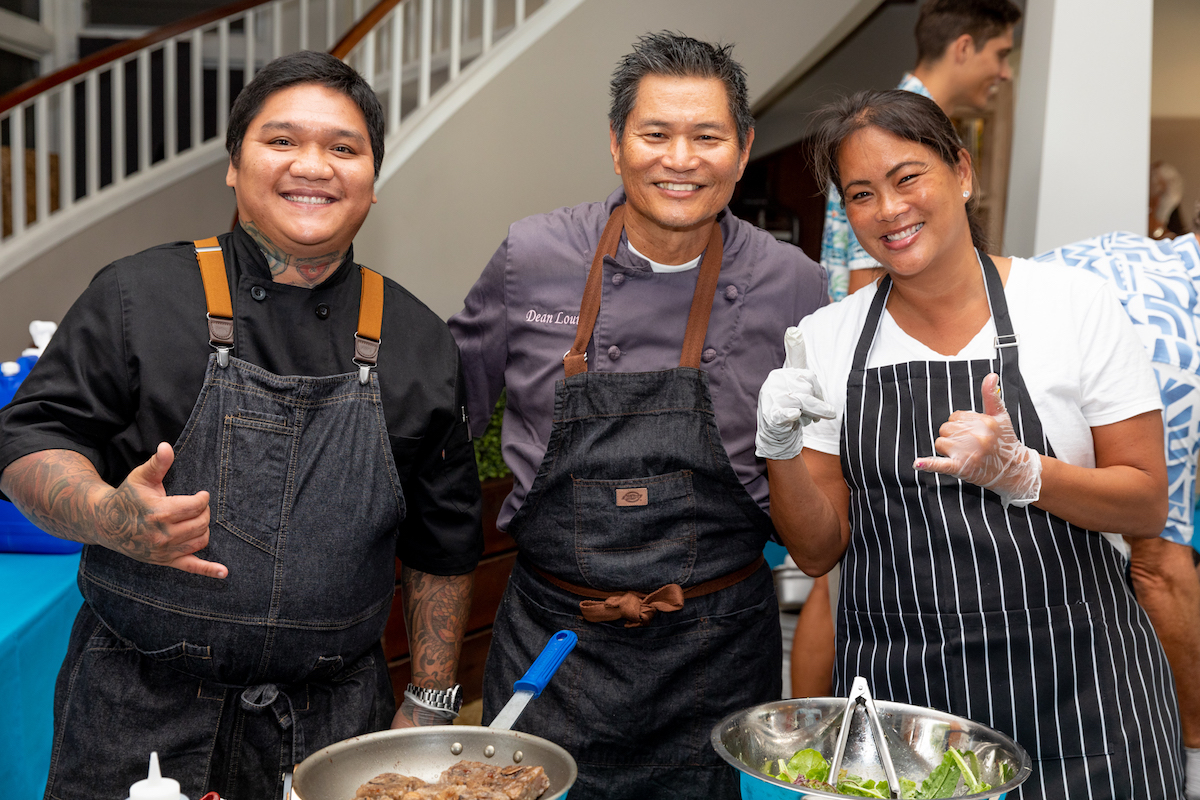 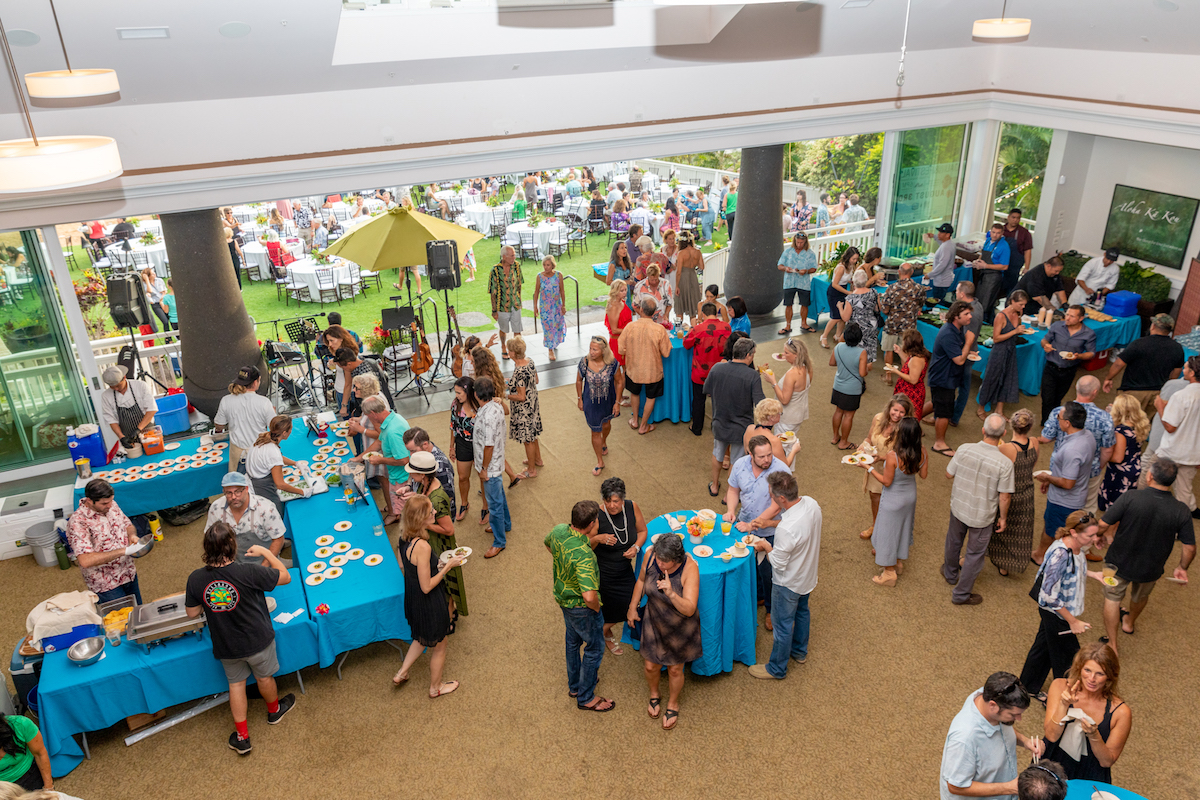 Past year event photos above by Bryan Berkowitz

for the Huliau Food & Film Festival!

After a two year pause, our annual benefit dinner is back on August 6th at Sugar Beach Event’s beautiful oceanfront venue in Kīhei. The Huliau Food & Film Festival is a farm-to-table celebration of local agriculture featuring local chefs and student-produced films. This year’s event will feature a  six course farm-to-table meal, live music, and student films.  All funds raised will benefit our environmental education programs for Maui youth.

Important changes to this year’s event: As part of our COVID safety plan, event capacity has been reduced and you will only be seated with members of your own party. For this reason guests must book an entire table for 2-8 people, rather than individual seats. Ticket prices are reduced with larger table sizes. Please note that there will NOT be a parking shuttle this year. Each table will come with 1-2 on-site parking spots (depending on the size of the table). We encourage guests arriving in additional vehicles to arrange a carpool with others in their party from nearby beach parking areas along North or South Kīhei Road. For questions please email info(at)mauihuliaufoundation.org.

Our 2022 Huliau Food & Film Festival will feature a six course farm-to-table meal prepared by a team of talented chefs who have generously volunteered their services to raise funds for our programs. 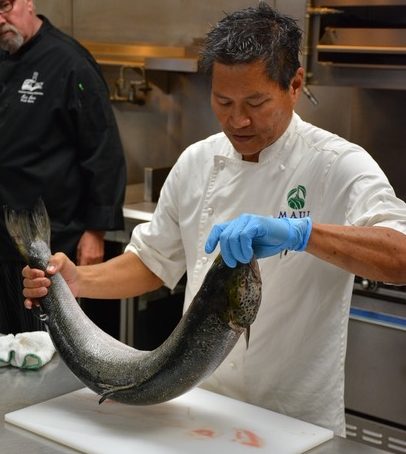 Since 1999 he developed, owned and operated restaurants in Hagatna, Guam and Lahaina, Maui, then began teaching Culinary Arts classes in 2005. He was the UHMC Culinary Arts Program Coordinator from 2012-2016 and now programs and coordinates non-credit Continuing Education and Industry Training courses for Maui College. Originally from Charleston, South Carolina, Chef Lee’s love of all things culinary began at a Mexican restaurant 30 years ago. The dedication she demonstrated there eventually led her to the opening culinary coordinator position for a national restaurant concept where she travelled throughout the southeast developing and training new employees. Working with the Director of Culinary Development, Chef Lee’s career path became clear. Subsequent to that, an eight year stint with Metromedia Restaurant Group led Lee to the decision that she would move to Maui. She landed in the management team at Spago at the Four Seasons Resort, Maui. After nearly three years with Spago, Chef Lee created and sold her first catering company. Learning from that experience, she built her own ocean front venue where she is enjoying success at Sugar Beach Events. 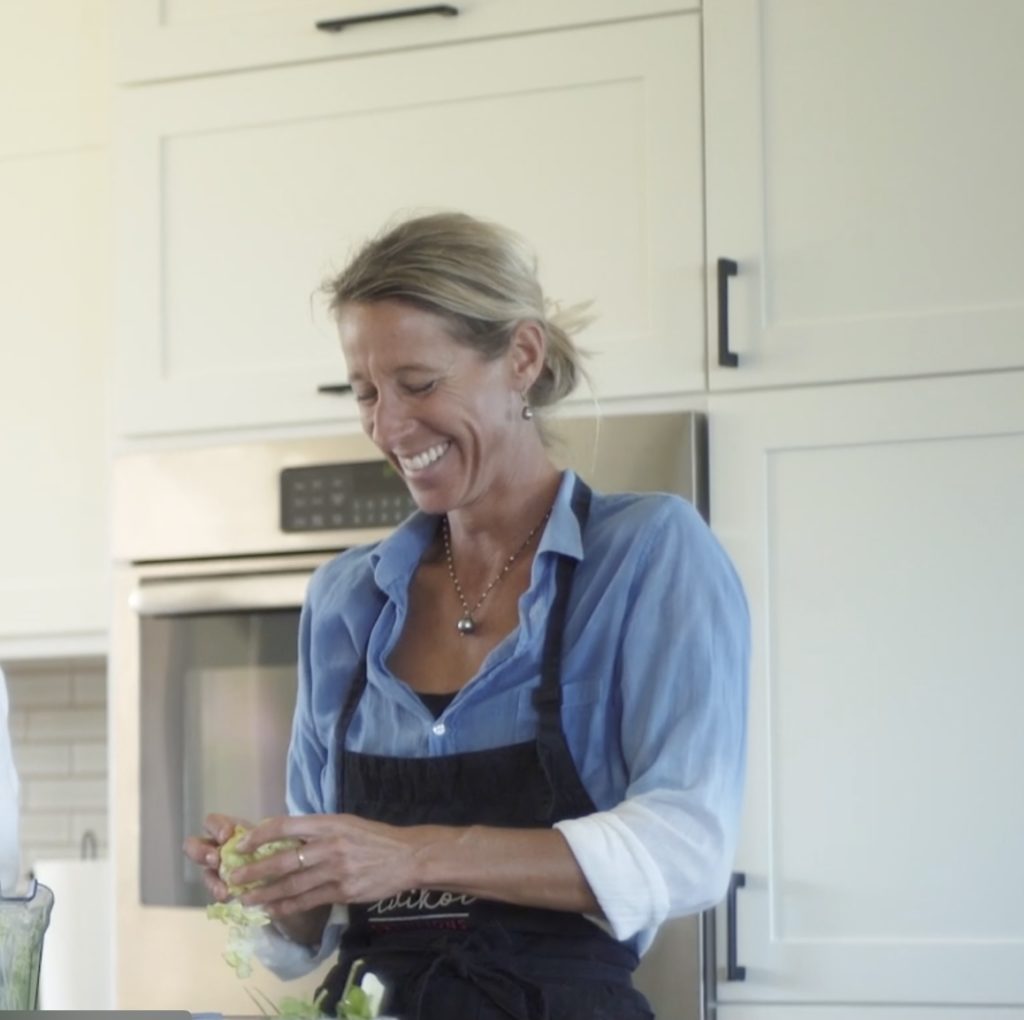 Chef Maja Liotta is a self taught culinary professional, working in the trenches from an early age in her parent’s restaurant in coastal Maine. Hauling up lobster pots on her Dad’s lobster boat and foraging for mushrooms in the soggy Maine woods left a mark on Maja at an early age. Always at home in the forest and along the shores, she developed a keen eye for uncommon ingredients and honed a gift of creating meals with them.

Upon graduating from college in 1996, she ignored the nudge to pursue culinary. The Liotta ‘ohana made Maui home 7 years ago and their first home was on an organic farm in Keokea. It wasn’t long before Maja was offered the unique opportunity to work as a chef for a private concierge to discerning clientele and her business grew from there through word of mouth.

Maja’s passion is creating diverse and healthful meals for residents, friends, family and visitors to the islands. In 2017, she added her Culinary funshop, “Chiffonade and Sizzle” to her offerings as well as promotes clean eating and culinary instruction for local school aged children across the island for various organizations including Haiku School, Kihei Youth Center, The Blue Zones Project and Hawaii Tech Academy. She is also a regularly featured food writer and recipe contributor for Maui Family Magazine. 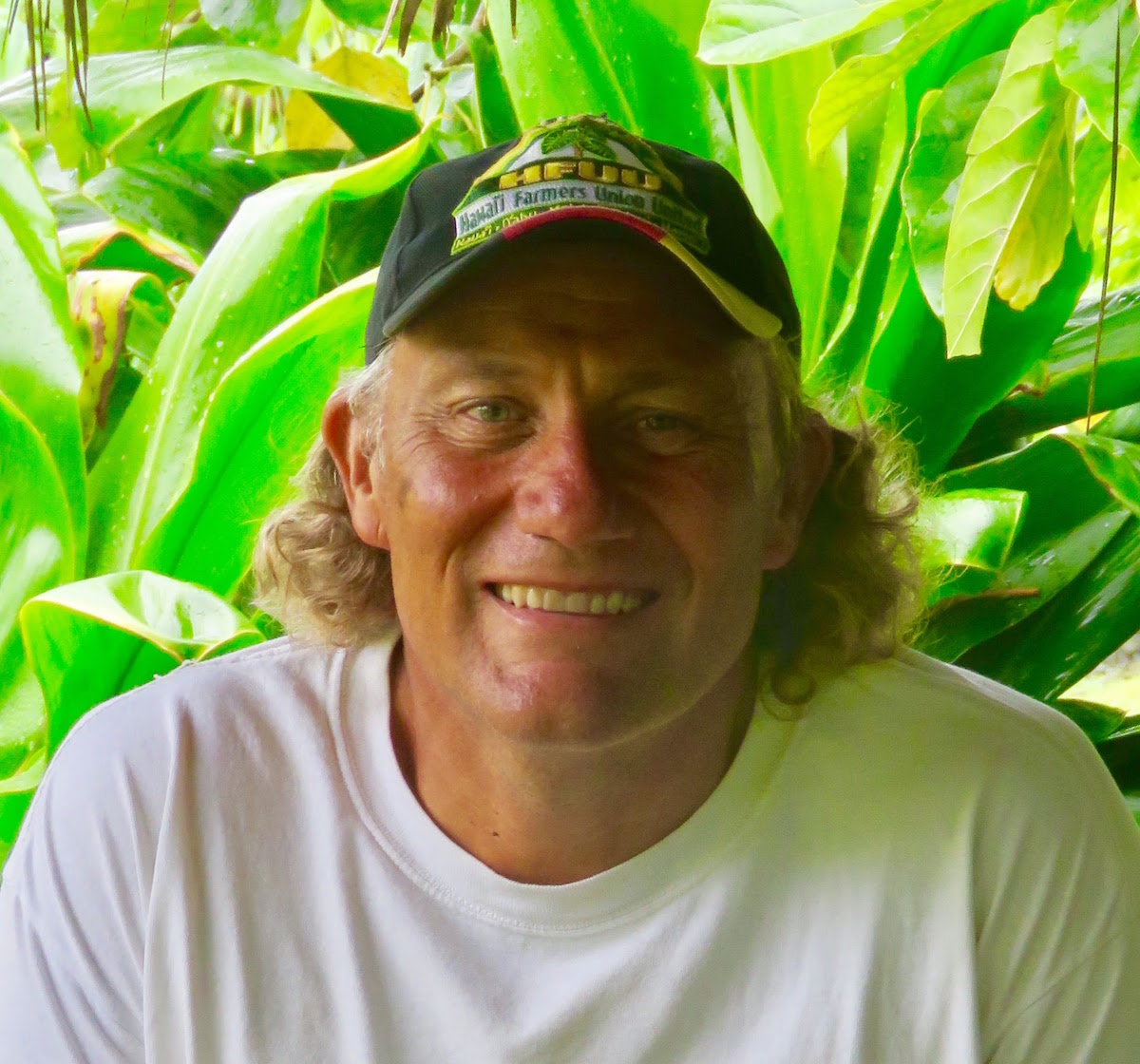 Chef John Cadman is passionate about canoe plants, especially ʻulu (breadfruit) a main ingredient in his most locally-sourced Pono Pies, and its potential as a healthy and local food source for people throughout Polynesia. John is famous to many of our students from his days working as cafeteria manager in Haiku Elementary, King Kekaulike High School and Kamehameha Schools Maui.

Now as owner and operator of Pono Pies, John creates delicious sugar, gluten, dairy and GMO-free raw desserts out of as many locally sourced ingredients as possible. His pies are not only delicious but also represent his contribution to eating in a more pono (righteous) way that is both healthy and sustainable. 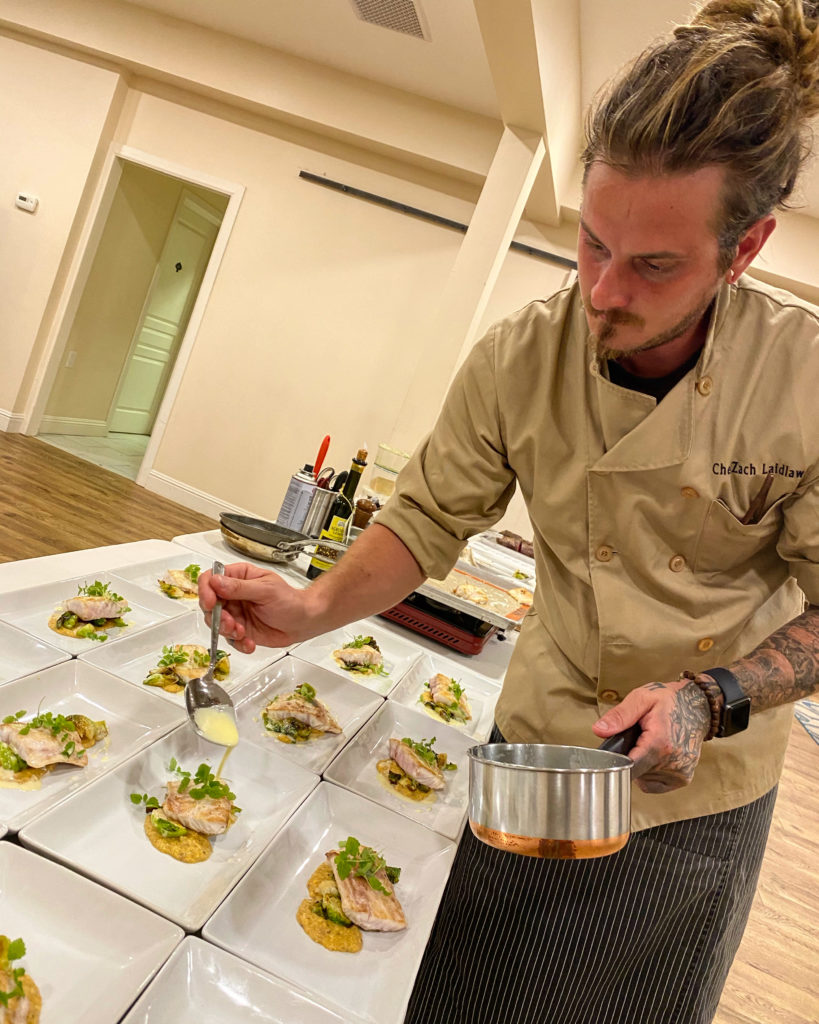 Zach Laidlaw, an internationally accomplished culinary maven, was raised in the small town of Burlington, Illinois. He started in the industry as a dishwasher at the young age of 13. At age 16 he started cooking and quickly soon realized his passion and creativity would be endless in this profession. With a degree in both Culinary Arts & Hospitality Restaurant Management, Zach quickly stood out with his culinary talent taking him all around the world cooking and managing. From Chicago to South Beach Miami, followed by the British Virgin Islands, onto Australia and then here in Maui.

Maui is where he landed the Chef de Cuisine position at Fleetwood’s on Front St. for two years working next to Chef Eric Morrissette. He currently is the Executive Chef for Hua Momona Farms, West Maui. Chef Zach is known for developing unique flavors and his stunning presentation. He creates memorable dining experiences true to the farm to table movement. “It’s very fulfilling to create a modern dish with the vegetables you just grew/harvested yourself”. He loves to further educate himself with self-sustainability and creating exquisite desserts for fun. Food is Medicine. 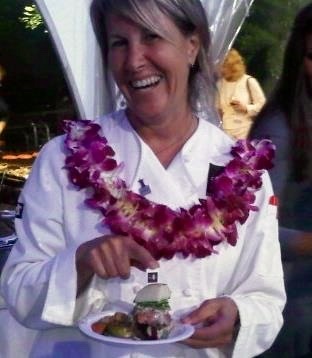 Carol, born and bred in Los Angeles, made the move to Chicago to spread her culinary wings in 1995. She arrived to find a culinary pulse that rivaled New York as the best food city in the country.

Carol worked with her sister to open and operate, a ‘great neighborhood haunt’, Deleece Restaurant for 10 years before opening her own. She opened Sola  Restaurant in 2006, using Hawaiian flavors and traditions with midwestern sensibility, expressing her love of the Hawaiian islands.

She embraced the farm to table movement in Chicago and involved herself with the Green City Market bringing the bounty of the midwest to the city for the top chefs to use in their restaurants.

Now retired, she devotes her time to creating ice cream flavors (a passion she discovered at Sola), making cookies, an occasional catering job, entertaining at home, enjoying beach life or skiing in the winter and raising her pup, Edie.